The purpose of this blog is to make to understand the payment service providers and other merchant services industry competitors with many merchant fraud protection tools.

The current article is majorly focused on PSPs who have various merchants in their portfolios, and, therefore, need well-organized merchant fraud protection tools to make sure steadiness and safety of their operations.

Information on the character of merchant fraud can be seen in our articles on the fraud protection aspect of payment gateway selection.

Merchant fraud protection systems are generally included in payment gateway software products. They are based on many norms for observing each merchant’s transaction processing activity. The coming flow of transactions is scanned and checked against this standard on some regular generally daily, or monthly basis. If some distractions take place, they are straight away flagged, underlying merchants or transactions can be seen, and any compulsory measures can be taken as fruitful as possible.

Some standards are observed on daily basis as well as on a quarterly basis. For example, a huge transaction amount is a standard inspected on daily basis only, while majorly processing volume can be inspected both daily and monthly.

For every specific business, relying on its nature, a limit is, usually, made for one or more norms. If the limit is surpassed, the incident is inspected, and, if necessary, particular measures are taken.

Usual transaction volume, as well as transaction count, are inspected. At the very basic level, the highest and lowest transaction (ticket) costs, which a merchant specified in the merchant application, are observed. Particular deviations from these standards might show some sort of merchant fraud.

The maximum shift from averages

Generally, most businesses come after the same processing patterns in day-to-day style or month to month with no departure from average. If any particular diversions seen from average are registered, they are declared as signals for checking the particular case behind the deviation. Generally, granted deviations amount is up to near about 5-10 %. If this limit is significantly surpassed, it may raise the impression. Deviation restriction should be seen in an average in every transaction amount, average daily transaction count, and average daily (monthly) processing volume. Basically, a 60-day window is used for daily averages and a 12-month window for monthly ones.

For certain sorts of businesses deviations from average are typical (for example, seasonal or instigated by the sale of some highly-demanded product), so the standard is not always a conclusive one, but in certain cases, it can be pleasant.

Duplicates can either mean actual fraud or you can say just a human error. Duplicates can be diagnosed according to many criteria.

Oddly, a huge percentage of transactions of a definite category in the overall transaction volume is one more representative standard. If the maximum permitted percentage of credits, refunds, verifications rejects, ACH reverse backs or chargebacks is above the limit, it may be a signal of merchant fraud have been taken place.

If we talk about the card entry mode there are typically three basic card transaction groups: swiped, keyed, and CNP. If a few sorts of entry mode is controlling a business, an immediate boost in the number of transactions with one more entry mode may define as fraud.

Some transactions are generally submitted during shop hours which is generally before 8 am or after 8 pm. 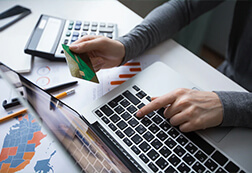 For a few businesses, after-hours processing is granted, but which is not usual in a large number of transactions capitulating after hours may be a mark of potential fraud.

If transaction density is, usually, repeatedly scattered all across the merchant’s working schedule (for example, majorly transactions take place in the morning), unexpected shifts in this distribution may also be considered doubtful and, possibly, specify merchant fraud.

Some merchants stop processing transactions but do not close their merchant accounts. Such merchant accounts can, potentially, be used by fraudsters. Consequently, the number of days during which there is no activity on the account should be monitored, in order to prevent potential fraud due to the merchant’s lack of attention.
The absence of activity does not signify fraud, but rather, specifies that the merchant is not in the use of the account.

Accepting Your E-check Payment: A guide To You

How Does Good Payment Gateway Work?

Some merchants commonly process transactions only on specific or in a few days of a week or can say in a month. If such a chain faces any breaker age (for instance, a merchant generally processes on Monday, and the activity is done for an entire week, or a merchant, generally processing transaction 20 working days a month, instantly commence processing for the complete 31-day, it can indicate fraud).

Looking over the potential of merchant’s fraud signals is reproving for payment service suppliers, which gives large numbers of merchants, and suppose financial risk and liability for the merchants in their portfolios. In order to effectively prevent fraud, such businesses have to use merchant fraud protection tools.